Having Fun with Animation

Final Code for Eyes and Movement

Learn how to use Sparki's LCD to display information.

Sparki features a small LCD display that will let us make drawings, write text, and show the status of other components of the robot, such as the readings from its sensors.

In this lesson you will learn the basics of how to use the LCD display.  This will become a useful element once we start to work with sensors in the upcoming lessons. 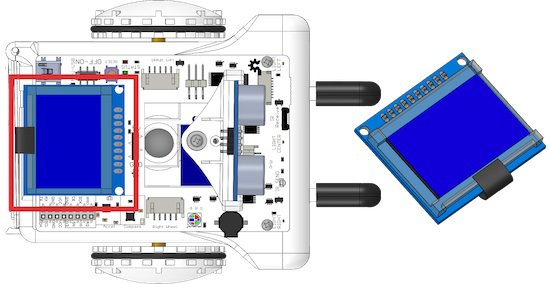 Every display out there is composed by pixels. Pixels are the smallest points that we can control in a display, be it a cellphone screen, a computer monitor, a TV, or Sparki’s LCD. In our tiny LCD, pixels can be in one of  two states: ON or OFF. By turning different pixels ON and OFF, we can draw something, or write text into the display.

For example, the following image shows capital “A” letter made of square pixels, like the ones in Sparki’s LCD:

How can we set a pixel ON and OFF? There are several commands that we can use in our programs to control the pixels, and we will learn more about them soon later in this lesson. But first, we need to understand how each pixel is identified in order to control it.

How can you tell Sparki which pixel to change? Using a system called coordinates, in this case  X (horizontal, or left to right position) and Y coordinates (vertical, or top to bottom coordinates). We type coordinates as these two numbers, X and Y, typed as (X,Y).  In the image below, we have a starting (or zero) point. This point is (0,0), or an X value of 0, followed by a Y number of 0. The pixel below has an X value of 3, and a Y value of 5, so we talk about it as the (3,5) pixel: 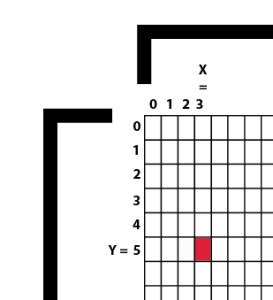 Here you can see the complete Sparki display. It is 128 pixels wide and 64 pixels tall: 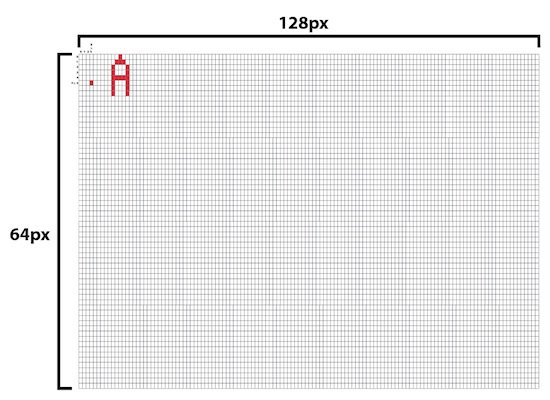 Here are some examples of pixels with their corresponding coordinates:

Try entering different coordinates for a bunch of pixels. You may want to get used to the coordinate system to the point where you can identify if a pixel will appear on the upper half or the lower half of the screen as well as knowing if it will be on the right or left hand side just by taking a look at the pixel coordinates.

Pixels are a small part of the screen. If you were to write a letter, or draw a circle, or almost anything else by turning on and off each pixel it needed, that would be a LOT of work! That’s why even though we could still write (and read) individual pixels, we will not be doing that most of the time. Instead, we will be using simpler Sparki commands to draw things, without having to turn on and off each pixel one by one. Imagine the number of lines of code you would need to write in order to create a square that is 20 pixels by 20 pixels? It would take 400 lines of code just to make a simple square!

Let’s start with a small example: drawing some lines to make a large X on the display, corner to corner:

So, how does this work? Let’s take a general look at the code:

So what about circles, rectangles, or even filled zones? Let’s try the following code, and then you can experiment a bit with the coordinates and dimensions of the different elements drawn there:
Arduino

Of course, you can always go to the File->Examples->LCD menu in the SparkiDuino software, and play with the examples there.

Rectangles- Let’s take a look at how these lines of code which draw rectangles work. There are four coordinates inside the parenthesis. The first two numbers are the coordinates of one of the corners of the rectangle. The second two numbers are the coordinates of the corner that is the diagonal opposite of the first. Really, the second set of numbers could be the upper left corner and the first set of numbers could be the lower left corner of the rectangle and you could draw the same rectangle using-  sparki.drawRect(30,10, 5,5);

Circles- Now let’s take a look at the code that draws circles. We’ll focus on the command  sparki.drawCircle(55, 30, 5); The first two numbers are the X and Y coordinates of the center of the circle Sparki is going to draw. This is exactly the same as the code for drawing a pixel. The main difference is that Sparki will draw a circle around this point. The radius of the circle is the third number, 5. So this code will draw a circle that is 10 pixels tall and 10 pixels wide with a center at 55, 30.

Another important thing that we can do with the LCD display is writing text and numbers. This is very useful, especially once we start to work with Sparki’s sensors since we can easily use the LCD to display the values of the sensors Sparki is reading. This way, if something is not working as we expect in a program using one or more sensors, we can see the exact readings on the display. You can also use the LCD to print out where Sparki is in the code you have written.

There are two ways of writing text: The first would be to write each individual letter. The easier way is just printing the text, and the Sparki LCD will automatically position each printed line after the other in the LCD.  Please note that in the example below, the sparki.println() function can both print text strings and numbers (integers and floats):

The other way of writing a text in the LCD is a bit more tricky, but it will enable us to position a character or a text string anywhere on the display:

With this second way of displaying letters or Strings you can make the words, letters or numbers appear anywhere, which is useful if you are animating something with text or making a diagram of something (maybe a diagram of Sparki) and you want to label parts of the diagram. With the first method you have no control of where the text will show up, but it’s great if you just need to display information and don’t care what it looks like or where it is on the screen. When using the second method the first two numbers are X and Y coordinates, while the third value inside the parenthesis is the text you wish to display.

Please take into account that if we want to print numbers using this last method, we need to convert them as shown in the following example, using the string class from the standard Arduino API:

(NOTE: if you don’t yet understand the conversions used here, don’t worry! We are just showing a little more advanced way of visualizing numbers, but we will primarily rely on the simpler print() function in our future lessons)

The last thing that we will learn here is how to do some small and (very) simple animations with our display. Let’s start with a simple circle that will move across the screen:

Here is the code:
Arduino

See the trick? We have used a variable which changes instead of a fixed value for the X coordinate. We increment that variable (called “x’) each time through the loop cycle. Once the variable reaches its maximum value (which we have set as 127 here), we reset ‘x’ to zero. This way, the circle crosses the small screen over and over again.

You can experiment modifying both the delay time and the x variable increment. Regarding the delay time, please note that if you do it too fast, you will not give enough time to the microprocessor to render the images on the LCD display, but push it a bit so you can learn about its graphical processing capabilities!

How could you change the code that effects x so that the ball moves faster? How about slower? Don’t just think about it, try out different code on Sparki and see how it works!

Another interesting thing that we can animate besides the position of an object is its size. Let’s try the following program to animate the height of a vertical bar (made with a rectangle):

Finally, here are all the instructions provided with the Sparki software to work with the LCD display:

Having Fun with Animation

Drawing Eyes- Now let’s do a little bit of animation that gives Sparki some eyes and makes them look right or left depending on which way Sparki turns. The first things we need to draw are some plain old eyes. We can do that using the drawCircle( ) command. We’ll draw to large unfilled circles for the eyes with two smaller filled circles inside for the pupils.

Making the Eyes Blink- Now, for fun, we’ll make the eyes blink. That means we have to move the code around a little and make a counter so that Sparki only blinks every once in a while.

See how useful counters are? If you’re really looking for a challenge try adding eyelashes to your animation. Don’t forget that the eyelashes will need to move when Sparki blinks!

Making the Eyes Look Right and Left- Ok, now we’re going to combine what we learned in the moving ball section and our current code. We’ll write some code that makes Sparki’s pupil’s look right and left while Sparki turns left and right. Here’s the code that deals with right hand turns, I’ll leave the left hand turns up to you.

There are a bunch of different ways you can write this code to achieve the same effect. (In fact, you don’t really need to write the commands that draw the larger unfilled circles that are Sparki’s eyes more than once.) Here’s another challenge- how can you write this code so that Sparki’s pupils pause while it is looking as far to the right as possible?

After you’ve made Sparki look to the left, how about giving your Sparki face a nose and a mouth? Looking for an animation challenge? Try giving Sparki a straight line for a mouth and every once in a while making the line get shorter until it is only seven or eight pixels wide and then making a circle that gets larger until Sparki looks like it is whistling. (Hint, you may need to draw two lines and a circle between then to do this.) During this portion of the animation you can even make Sparki’s piezo buzzer whistle a little tune to match the animation! Here’s a picture to help you figure out what each frame in your animation should look like- 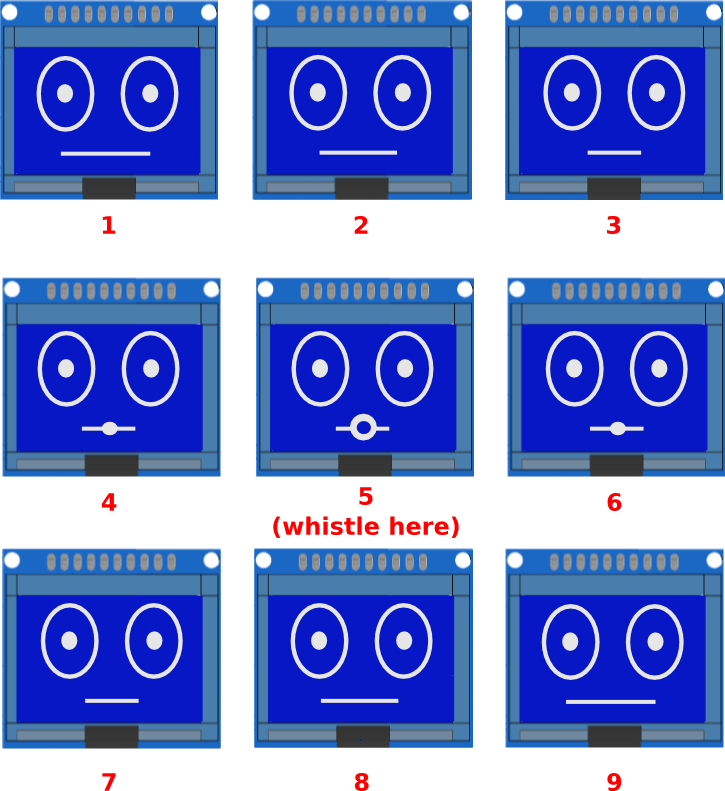 Final Code for Eyes and Movement