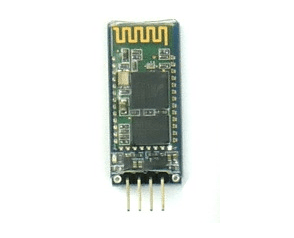 The module is a JY-MCU Arduino Bluetooth Wireless Serial Port Module. We are currently shipping units with the Linvor 1.7 firmware. The datasheet/manual is available  here

Connect the Module to your Device

To pair, use your  Device’s Bluetooth browser to locate the Bluetooth Module. The name should be  “Arcbotics” and the default PIN is “0000”. Windows 7 and OSX specific guides are available below:

Much like the modems of yore, the Bluetooth module responds to a limited set of Hayes-like  AT commands.

The module enters AT command mode when you power it up and it is not connected/paired to your PC.

The following is a subset of all the available commands.  NOTE: Command intervals must be of 1 second and  must not be followed with a newline/carriage-return, it is therefore easiest to copy/paste the commands instead of typing manually.

All settings are saved automatically.

The red LED on the Bluetooth module does not come on

PoMoCo still might not connect even if everything is configured correctly (i.e. the Bluetooth module baud rate is correct, the computer is paired to the Bluetooth module and a COM port has been assigned to the Bluetooth adapter by Windows). This might be caused by the connection routine in ServotorComm.py failing to connect to the correct COM port. The routine first tries to use the COM ports returned by serial.tools.list_ports.comports(). This usually doesn’t return anything on Windows so other logic, called the ‘windows method’, is used to iterate through the COM ports from 1 to 100, testing each one. For some reason the Bluetooth COM port is returned by serial.tools.list_ports.comports() but does not allow a connection. You can force the connect() function to use the ‘windows method’ by commenting out the code that tries to use the comList. For example comment out the code as follows:
Python

Some Bluetooth modules ships pre-configured for 115200 baud though recent versions of the Servotor firmware are configured for 9600 baud. If you use the Servotor32 2.0 firmware or above, however, it will automatically reconfigure itself for you.

There is a red LED on the module which indicates its state. The module is on when the red LED is flashing. It will also flash when you pair it to your computer. It will stop flashing and glow when a connection to the module has been made (e.g. when you are using PoMoCo to control Hexy via Bluetooth).