What We’ve Covered So Far

Comments are created using two slashes // for one line of comments and /* */ for multiple lines of comment. They don’t effect code and they are there mainly to help people who are writing or using code. Comments can also be used to stop code from effecting your robot’s actions without visibly removing the code from your program.
Arduino

Libraries are large sections of code that can be imported. Then coders can access functions inside that library to make programming easier. All Sparki projects should have the sparki library imported. Here’s an example of importing a library-
Arduino
Here’s an example of using the move forward function from the sparki library-
Arduino
Setup: Before entering the loop function Sparki will execute the code inside of the setup function exactly once. The setup function is used to do things like calibrate sensors, start communication and anything else you want to have happen only once.

Robots work by executing code over and over again. Any code you write inside of the loop function will repeat over and over until the robot runs out of batteries or is turned off. Every single Sparki program needs a loop function.

Semicolons are at the end of every line of code which tells Sparki to complete an action of some sort. They or sort of like a period that indicates Sparki has all the information necessary to do something and can start moving around one and zeros, reading sensors, blinking LEDs and turning motors.

Question and Activities to Try

1. Just write the basic parts of a Sparki program from scratch. To create an empty file go to the File menu, click once and move the cursor down to select New. You can also hold down the press the Command (Control key on a PC) and ‘N’ key at the same time to use a shortcut. When creating your empty program include a library, the setup function and the loop function. Make sure to include all the important parentheses and curly brackets. 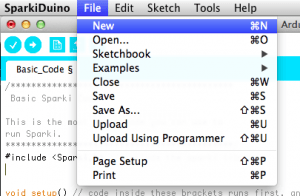 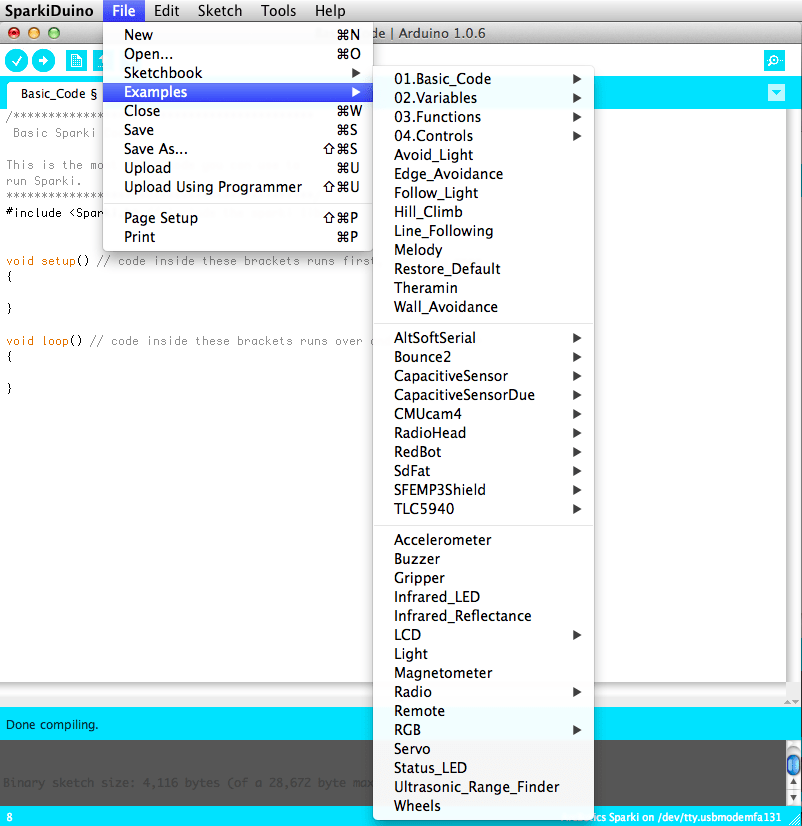 Where to find example code for Sparki

5. Nested curly brackets means that the computer has to have a “true” answer to multiple questions, one inside another in order to get to code that is in nested curly brackets. This means that the nested curly brackets are a couple of levels deep in logical terms. For example-
Arduino
Now try counting the depth of nested brackets in the some example code by doing the following exercise- Count the opening brackets { on your hands using your fingers. Any time you see a closing bracket } remove one from the total count you are keeping on your hands. Any time you get above two logical layers deep make sure you can identify the questions, functions or loops that need to be answered “true” in order to get Sparki to that logical depth. Hint- it won’t always be the last opened curly brackets that got you to the logical depth that go you to where you are currently. Also, don’t worry if you can’t understand some (or a lot) of the code other than the curly brackets, you’ll get there eventually. Here’s an example-
Arduino

If you’ve made it through this far you’ve definitely got what it takes to learn how to code! Keep going and learn about how to use information next, after all- information is power.